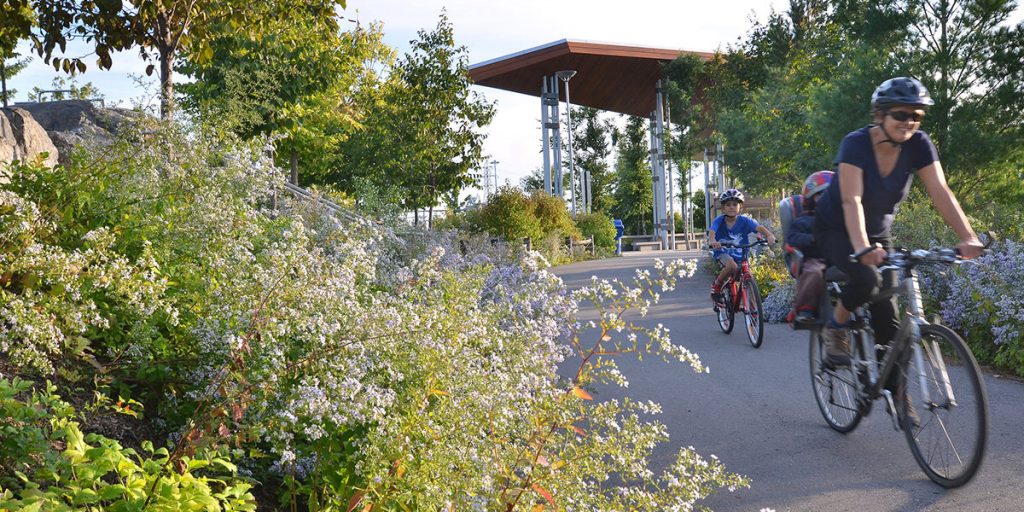 The waterfront is made up of incredible landscapes, and most significantly, amazing public spaces. Stretching east to west, the development of diverse outdoor spaces for the public to visit has been a focus of Waterfront Toronto. One such example is the Corktown Common, a popular area with parks, trails, and a splash pad. While these outdoor features are what make the Corktown Common so great, the flood protection landform is the most essential feature of the area. Not sure what a flood protection landform is? Let us explain.

Prior to the development of the area surrounding the Corktown Common, the West Don Lands were particularly prone to severe flooding during any bout of extreme weather. An intense rainfall, or stormwater runoff would cause the water levels to rise beyond the river bed, and spill into the surrounding area, causing flooding. In 2003 Waterfront Toronto began the necessary steps to revitalize the West Don Lands, in order to make the area useable. In collaboration with the Toronto Region Conservation Authority, the team undertook a ‘Class Environmental Assessment’ to understand the conditions of the area, as well as put a plan in place to protect against the risk of flood. It was found that the conditions weren’t stable. The West Don Lands were sitting atop soggy soil that would surely shift and settle if any development were to be undertaken. It was realized that innovative urban infrastructure was needed in order to develop on the land, and thus the development of the flood protection landform began.

The flood protection landform extends from Queen Street, down to the railway tracks in the southern area of the West Don Lands. The development began with surcharging: piling an absolute ton of dirt on top of the site in order to squeeze water out of the ground below. The landform is made up of roughly 400,000 cubic metres of soil taken from construction sites across the GTA. That’s the equivalent of 40,000 dump truck loads! The above image demonstrates the composition of this landform. The section of deep clay runs through the core, and helps in preventing water from penetrating through. A slope of different sized stones is also present, and prevents erosion or this clay.

The Corktown Common is made up of very distinct landscapes, and this isn’t by chance! There’s a reason behind it. There’s a distinct ‘wet’ side and ‘dry’ side in the landscape. The design is such that the wet side will hold off flood waters or run off that may occur during a storm, thus keeping the dry side dry. The wet side is where you’ll find the clay and stone structure, while the dry side features the marsh area, which is connected to the area’s stormwater management system as well. The design not only protects the area from flooding, but it protects a surrounding 210 hectare area, including the financial district, from flooding as well!

The flood protection landform is an excellent example of urban infrastructure that helped to not only ‘future-proof’ a large section of Toronto, but also an essential part of the development of a popular area of the city.